My Name Is Connie and My St. Francis Prep Biology Teacher, Rodney Alejandro, Raped Me

This was not a fun blog to write, but I believe everything that led up to this blog happened for a reason, and that God wants me to do it, so here we go.

After the Brother Dominic Quigley blogs, I received an email from an SFP alum who wanted to let me know about a former SFP student named Connie. She told me that she believed Connie had been sexually involved with a biology teacher named Rodney Alejandro in 1987/88, and that he had possibly impregnated her. She said she believed Alejandro was terminated at some point soon after that, but wasn't exactly sure what became of him.

Well, after leaving some of the investigating to other people in recent days, that got me up and moving again. I still have my 1987 yearbook, so I looked up Rodney Alejandro. There he was, listed as a science teacher. Here's his picture; sorry it's flipped on its side: 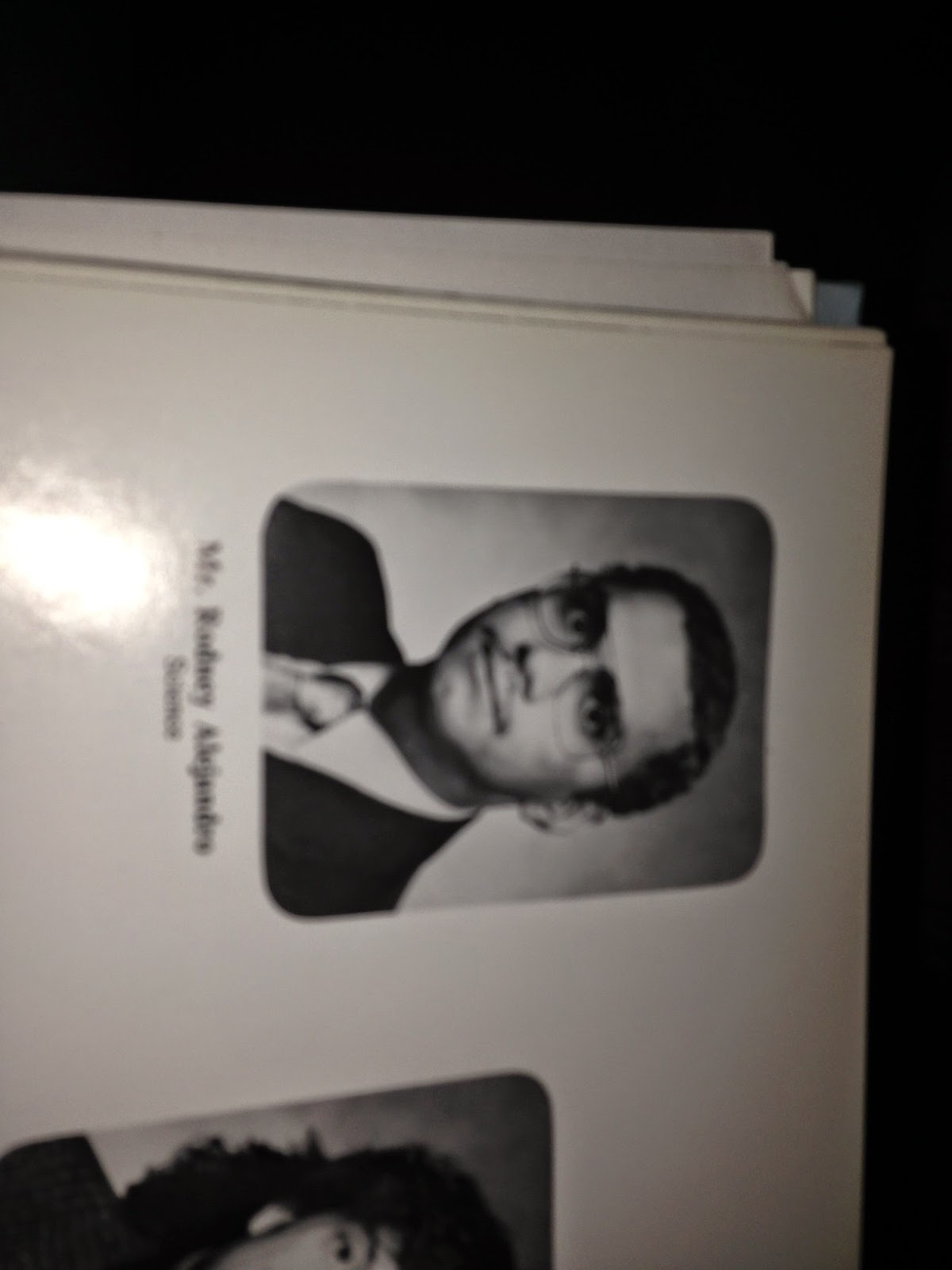 Then, I remembered that in those days, each cor for every year had a cor picture printed in the yearbook. The person who wrote me said that Rodney Alejandro was Connie's bio teacher in 1987-88, so I looked up what should have been Connie's freshman cor for 1986-1987 - and there Connie was.

So did this actually happen? Did this creep have sex with a little 15 year old girl when he was her teacher?

When I need to find people, usually the next place I turn is Facebook. Facebook has not failed me once in this investigative process that I began over three years ago and I am so grateful for that. I did a search, and I found Connie. The 2014 Connie looks just like the 14 year old Connie in that cor picture from so many years ago. So, I sent her a message. It's always so hard to know what to say to people I reach out to who I suspect may have been hurt by their teachers. So I simply asked "Did you ever attend St. Francis Prep?" And then I waited.

In the meantime, I did a little research on Rodney. I found his book: Rodney's Piece of Garbage Book
PLEASE CLICK THE LINK AND MAKE SURE YOU READ THE REVIEW!!!!!!!!!!!

I also saw that he taught at an NYC public school in Queens in 2010. This upset me quite a bit, that he is still around children, so I called the Department of Education and explained what I believed to be a very, very big problem that they had on their hands. They took my statement, and gave me a complaint number.

A few days later, I received a call from a DOE investigator who is a former NYC police detective. He said he had paid a visit to St. Francis Prep some ten years earlier regarding another issue so he was familiar with the school. I sent this detective everything I had found about Alejandro. The detective disclosed to me that Alejandro had been terminated from the NYC public school he was working at in 2010 for falsifying information on his records. He said that Alejandro could, in the future, appeal the DOE's decision, but if we wanted to get him blacklisted, we needed Connie to come forward.

Another few weeks went by - and then, the day before Thanksgiving, I heard from Connie. Yes, what I had been told happened to her did happen to her, but it was much worse than I thought. I also heard from her friend who wrote that review of Alejandro's book  - they are still best friends.

I filled Connie in on a lot of things - who I am, the blogs, Felicia Mooradian, Br. Dom, Br. DeSales, and more. I also told her how important it is that she speak with the DOE so that asshole Alejandro could not ever work in NY public schools again.

I set up a meeting for Connie and her friend with the DOE detective. His last words to her that day were that he was going to make sure Rodney Alejandro never works in a NY public school again.

I also called DA  Applebaum, whom I had spoken with on multiple occasions about Br. Dom. I told a team of three DAs about Connie, and they invited Connie and her witness/friend to speak with them about Alejandro.

Now, please be advised that what is coming next in this blog is very, very upsetting. Connie wants you all to know what happened to her, so she has asked me to publish an excerpt of what she wrote in preparation for her meeting with the DAs.

"It started when he had me play a strip poker game with him on a computer. It was cartoon characters stripping. He did this in the back room of the lab adjacent to his classroom...

January 24, 1988 is the first time Rodney Alejandro raped me. I lost my virginity that day. I was sitting on the floor and he became very aggressive and jumped on top of me and started kissing me with his tongue. He took a condom out of his pocket. Next thing I knew my clothes were off and he was on top of me. He penetrated me hard and broke my hymen. He covered my mouth because I was screaming. I was very scared. I went to the bathroom and discovered I was bleeding a lot. I just wanted to leave. I wanted to go home and crawl into my bed and pull the covers over my head. I asked him to take me home. He drove me home in his little red Hyundai. He was paranoid because he saw how upset I was. He kept asking if I was ok. He dropped me off a couple of blocks from my house and I walked home...

I always called him Mr. A because he acted like an authority figure  and was very intimidating. He scared me...

After school at SFP he would wait for me and pick me up and take me back to his apartment. I couldn't look him in the eye when he took off my clothes and raped me. He tried to seduce me and make me fall in love with him but he couldn't so he forced himself on me. He wanted me to look him in the eye romantically and I didn't feel that. After that I became afraid to look anyone in the eye...

One day after school he came to my house. He knew no one was home. My back door was always unlocked. He opened the door and ran in and saw me trying to run up the stairs. He grabbed me down and forced me into his car and took me back to his apartment again...

In the summer of 1988 I got pregnant for the first time. I failed out of SFP. He passed me with a 75. He forced me to get an abortion because he was afraid of going to jail. In January of 1989 I became pregnant again... I was severely depressed. He was the cause of my failing out of SFP...at this point I was suicidal...

Two people reported the rapes to SFP. The first was the mother of Connie's best friend.  She spoke with a female at the school who refused to put her through to the principal, who at that time, was Br. Leonard Conway. The woman on the phone, who Connie's friend's mom described to me as "a real bitch," allegedly point blank told her that she is a liar, and hung up the phone on her.

The second person to report the rapes was Connie's best friend. She alleges that she spoke directly with Br. Leonard and told him that Rodney Alejandro was raping her friend.

Shortly after that, Rodney Alejandro walked out the doors of St. Francis Prep permanently. My question is, how was it that he was able to have a teaching career after that?

Rodney Alejandro ruined Connie's life. She is 43 and still grappling with what happened to her when she was 15. Despite this, she chose to come forward so everyone could know her story, and so that this does not happen to any other girl at St. Francis Prep ever again.

She also wants the St. Francis Prep administration to know that she will tell anyone her story in support of  people who come forward about harassment and abuse at the school.

Unfortunately, the DA said he cannot press charges against Alejandro. The statute of limitations in NY for rape was revoked in 2006, but it was not made retroactive to the late 80's. Anyone who tells you that Bill Cosby can be prosecuted for rapes that allegedly occurred in NY 30 years ago is full of crap. It's sad, it's wrong, but that's the way it is.

I guess I will have to see what I else I can do about this situation. I will keep you posted.