My Name Is Jonathan, And This Is What the St. Francis Prep Administration Did To Me

The miraculous thing about my blog is that every time I post, more people contact me about their experiences. After last week's blog, one young man came forward who was adamant that he wanted his story to be heard. The main reason for this is that he does not want what happened to him at St. Francis Prep to happen to anyone else. These are the same reasons Felicia Mooradian filed her lawsuits against the school. Coincidentally, she and Jonathan were students there at the same time.

My words could never even approximate how Jonathan describes his experiences, so here is what he wants you to know, in his own words:

"I was a student at SFP from 2006-2007. During that time I was bullied tremendously and despite going to the administration and my guidance counselor, nothing was ever done to correct the situation. I would have students (aka students on sports teams) make fun of me in the halls, in the classrooms, at school masses, cafeteria, even the bus stop. I was also physically threatened by a student after gym in the locker room.

During my sophomore year at Prep, the bullying intensified. From the first day back at school, students had started verbally harassing me again. It got to the point that I did not want to go to school anymore.

(I am also a student that required special needs due to motor skill issues that resulted from birth trauma.) As such, things such as handwriting were quite tough for me I brought one of my assignments to one of my teachers, Mr. Espinal, and he made fun of my handwriting in front of the entire class. My parents had gone to the administration before the start of school to have them inform the teachers about some of the issues/accommodations. As a result of the intense bullying, I had no friends in school at all.

Ted Jahn had set me up to meet a sophomore during lunch. However, this particular student spoke of pulling down his pants in front of little kids at a camp and someone from his 8th grade class throwing smoke bombs in the bathroom. In my opinion, that was very inappropriate behavior. He had also promised to set me up with another group of students, which he never did.

In addition, my guidance counselor, Nancy Williams, was taken away from me. At this point, I was very depressed, crying all the time and not wanting to go to school. One day, as a result of not feeling safe anymore at the Prep, I left school during the day and walked nearly 7 hours to speak to my Karate sensei as I felt safe there. The next day, my Mom and I were in a meeting with Mr. Jahn. What was very disturbing to me was that despite the fact we told the administration the names of all the students that had bullied me (aka students on sports teams), they completely denied it.

A. I get an evaluation by a psychotherapist
B. I get a letter from a neurologist
C. I would be kept home from school on 9/26

We made sure to do everything that was agreed upon. However, the next day 9/27, Mr. Jahn sent an email to my parents cancelling the meeting and kicking me out of the school.

Keep in mind that I was an A student, and never had detention. The school chose to protect those who bullied me and keep them in the school, and instead punish me.

I have read many of the posts about Prep on your website, and it is truly sad that many innocent students have been bullied, raped, emotionally scarred at the hands of an evil administration."

Are you sick to your stomach now that you've read this?

Interestingly, after last week's blog, Brother Leonard sent out a hard copy letter to alumni and a follow up email basically begging for donations. Here is the email: 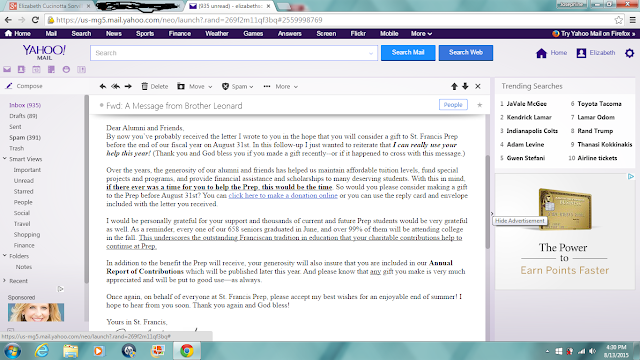 Note the line "If there was ever a time for you to help the Prep, this would be the time."  Yes, I'm sure Brother Leonard thinks this would be the time. From his perspective, this would be the time because (as I have been informed by a very good source) the enrollment for the upcoming school year is for the first time below 2,500, they have canceled renovations, and they instituted a hiring freeze. They are only replacing teachers who quit after June 30th on an emergency basis - hence the email from Joe Licata asking alumni if they know anyone who might be interested in teaching there.

If you think that email from Joe Licata was due to altruism of the school toward their alumni then tell me why, when last year well over a dozen teachers quit or retired, they did not send such a letter to alumni asking if anyone wanted a teaching position. The letter screams of desperation, because the new school year is starting, and they needed to fill that position in a hurry.

I leave you with this thought: In light of Jonathan's story, and all the others you have read on this blog, is this school worthy of your dollars? The tide has clearly turned for them financially and obviously many donors agree that no, they are not.

Jonathan, now in his early 20's, suffers from chronic depression and PTSD. I hope telling his story here has given him a little bit of peace. I, on the other hand, am much more restless.
Posted by The Burn Team at 4:50 PM 6 comments:

This Is What Parents Are Paying For at St. Francis Prep

Today, a graduate forwarded this email sent out by Joe Licata, Foreign Language Department Chair, regarding an open teaching position for the upcoming school year: 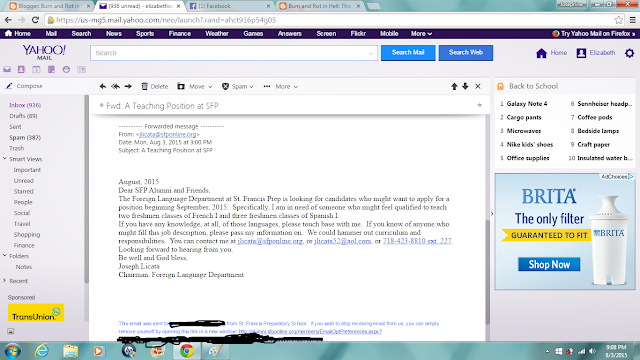 Does this seem ok to you? Specifically, I am referring to the portions which read "I am in need of someone who might feel qualified to teach..." and "if you have any knowledge, at all, of those languages, please touch base with me."

Any knowledge AT ALL???? Shouldn't a teacher have a lot of knowledge about the topics they are teaching? Does SFP have any standards for faculty teaching freshmen whose parents are paying close to ten thousand dollars in fees and tuition for their child's first year? Were there similar minimum criteria for SFP alumnus and child rapist former teacher Rodney Alejandro (whom I blogged about last December): This child rapist former SFP teacher is also a graduate

Can't they find anyone qualified to teach there without sending this pathetic email to their alumni base? (I would be absolutely mortified if I were Brother Leonard.)

Maybe not, I guess. Maybe they can't find anyone. Sometimes you don't get what you pay for.

As a side note, my book is coming out very shortly (like a few weeks from now.) More about that soon. In addition, here is my personal website: http://www.elizabethsorvillo.com/ if you feel that I may be able to help you and you would like to contact me personally.