Note on March 2nd: St. Francis Prep has now password protected access to its Faculty Handbook, obviously as a result of this blog. So I apologize, but the link I mention below no longer works. I am glad though, that I took these screen shots. I also printed the entire copy of the Faculty Handbook. If anyone wants one, please let us know and I will be happy to send it to you. The Administration at SFP are cowards, liars, and idiots and they are running scared. Even St. Francis himself would not help them with what is coming next.

I know I said I was taking a break from blogging, and I will. I just had to publish this though because it is actually a perfect example of the hypocrisy I have been blogging about. There will be more very public examples of this hypocrisy soon, but for now just read this.

This is Section E-12 from St. Francis Prep's Faculty Handbook, and it discusses Child Abuse. The link is: http://www.sfponline.org/docs/FacultyHandbook.pdf 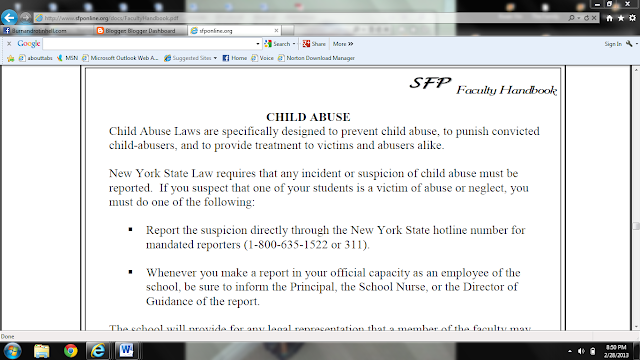 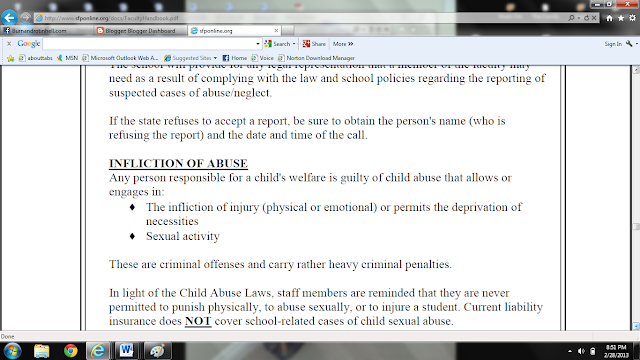 All staff members are REMINDED that they may never sexually abuse a child? And wait, here's the important reason why...because their INSURANCE doesn't cover it? Are you fucking kidding me?

Prep, really, you could not be more clear about your priorities - Money first, children second.

This has been a long road, and it has taught me many things about myself. One very important thing I have learned is, that I want to be a woman who finishes what she starts, and sees things through to the end. So in this regard, let me introduce you to attorney Kevin Mulhearn.

Kevin is a smart man, a dedicated man, and a good man. Most importantly, he believes in putting the welfare of children first, and seeking justice, even when the odds are stacked against him. Last year, after a three year battle, he won settlements for a dozen men, who when they were boys, were molested by a coach at Kevin's alma mater Poly Prep in Brooklyn. Kevin recently filed an abuse lawsuit on behalf of a former student of Yeshiva University's High School for Boys in Manhattan as well.

Kevin is now officially examining a large amount of issues related to alleged misconduct at St. Francis Prep. When I sent Kevin some of the documentation I carefully amassed over the past two years, he could not say no. Ironically, someone had contacted Kevin about the former St. Francis Prep teacher and child predator Robert Stenger, months before I even knew Kevin's name. So when I sent Kevin the information I had about Stenger, he was not surprised at all.

Kevin was recently sent an email by a former student at St. Francis Prep who had been horribly sexually harassed by a teacher. I was cc'd on this email. It is the kind of stuff you see in movies, but you don't think would actually happen. It is the kind of stuff you don't want to believe could happen because it is so disturbing. It is sad, and upsetting, but it is reality. Now something has to be done about it.

Kevin's father graduated from Prep with Joe Torre, so Kevin is taking these matters at St. Francis Prep very personally. So I am here to tell you, if you have been sexually harassed and/or abused in any way by former teachers Brother Ben O'Reilly, Robert Stenger, Tom Nuzzi, or any others from the past 30 or so years, please let Kevin Mulhearn know. He will help you. Kevin's email address is kmulhearn@ktmlaw.net and his phone number is (845) 398-0361.

As for me, I am taking a bit of a break from blogging. I am dedicating my attention to helping Kevin work through all the information I have for him.  There is a lot and it is going to take some time. However, if something irritates me enough that I feel I have to say something, you should know by now that I will.

So this is not goodbye, y'all. It's just goodnight.

EC Breaks Down the Legal Stuff in the Krolikowski Case, And Why St. Francis Prep's Defense Sucks

I am a lawyer. I am admitted as an attorney in New York and New Jersey. I hate lawyers, I think most of them are bloodsuckers, and ambulance chasers, and that's one reason I don't practice. But I have been a lawyer for about 20 years, and I know a thing or two. So that's why today I decided to break the legal aspects of the Marla Krolikowski case down, so we are all on the same page.

That being said, yesterday Eyewitness News on ABC 7 in New York had a new development in the Marla Krolikowski case. They reported that St. Francis Prep called them and said they are filing in court to dismiss the case because they are a religious institution. Then Sarah Wallace, the reporter, tweeted that St. Francis Prep claimed they had "religious right" to fire Marla.  So what that means is, SFP is apparently claiming the religious exemption under the NYC Human Rights Law. Which sucks big balls, because that exemption allows Prep to legally discriminate.

8-107 Unlawful discriminatory practices.
1. Employment. It shall be an unlawful discriminatory practice:
(a) For an employer or an employee or agent thereof, because of the actual or perceived age, race, creed, color, national origin, gender, disability, marital status, partnership status, sexual orientation or alienage or citizenship status of any person, to refuse to hire or employ or to bar or to discharge from employment such person or to discriminate against such person in compensation or in terms, conditions or privileges of employment.

Then it says this:

12. Religious principles. Nothing contained in this section shall be construed to bar any religious or denominational institution or organization or any organization operated for charitable or educational purposes, which is operated, supervised or controlled by or in connection with a religious organization from limiting employment or sales or rental of housing accommodations or admission to or giving preference to persons of the same religion or denomination or from making such selection as is calculated by such organization to promote the religious principles for which it is established or maintained.

So by claiming the exemption, what St. Francis Prep is actually saying is Catholicism, just like it does not condone homosexuality, does not condone transgenderism, and so they can legally fire Marla because that goes against their mission as a Catholic institution. If they claim this exemption under that premise, they will have the case dismissed.

That's it in a nutshell. What is amusing is, Prep has no problem taking your tax dollars. This is from their January 29th  Facebook page post:

Sign a petition to tell the politicians in Albany to support
the Education Investment Tax Credit to save Catholic schools.

As we celebrate National Catholic Schools’ Week and National School Choice Week, we ask for your help by signing our online petition supporting New York State legislation to save Catholic schools:

Recently, more than two dozen Catholic schools in New York have been earmarked for closure. This is a tragic loss for those communit...ies and the families who have sacrificed so much. The reason for the closures is simple: Fewer families can afford tuition. Academically, and in every other way, these schools are all excellent. They just could not attract enough students due to increasing tuition brought on by the rising costs.

To prevent such closures in the future, and to help give relief to the families who sacrifice so much, we are working on legislation to help families pay tuition and keep Catholic schools open. The legislation, called the Education Investment Tax Credit, will generate millions of dollars in scholarships for families who wish to give their children a Catholic school education. The bill has been approved by the New York State Senate but has not been voted on in the Assembly.

We are forming an “Invest In Education Coalition” – a broad-based coalition of individuals and organizations around the state to put needed pressure on Albany to get this important legislation enacted – but we need your help and ask that you join our effort by signing our online petition and then telling your friends.

Let's give families what they want and deserve – an opportunity to send their children to a quality Catholic school.

The Education Investment Tax Credit is the first step, but it won’t pass without your help. Please sign the petition today and support our fight to preserve Catholic education for our children. And don't forget to forward to your friends and family.

Thank you, and God bless you.

St. Francis Prep wants separation of Church and State when it is convenient, but they want your tax money at the same time, to support their agenda. Like I have said from Day One, they are a bunch of hypocrites.

I hope that if this case is dismissed, Marla appeals it as a Constitutional issue, on the premise that Church and State should truly be separate, and that the anti-discrimination laws should apply to every organization seeking or receiving public tax dollars. I bet in this day and age, she will get pretty far with the support of so many people and organizations behind her. At least it will bring national attention to a long overlooked issue.

I am interested to see how this all will play out. The school has been very silent lately. That is because they are backed into a corner, and they know it. If they say they fired Marla by legally discriminating under the exemption, they look like disgusting bigots. If they try and say they had other reasons...well, we're all pretty sure there are no other reasons because the last two reviews Marla received were stellar, according to the articles I have read. So we know they are liars.

They look like liars now anyway, because they have been saying for the last month they fired Marla for "appropriate" reasons not related to the fact she is transgender, and then yesterday they apparently flipped their strategy 180 degrees.

While we are all waiting to see what happens, may I make a suggestion? Do not send one fucking dime to St. Francis Prep. They don't care who dislikes them, unless that person is a donor with a dollar. Donors and donations matter. Alumni without the ability to donate, they do not give a shit about.

Wow, I would like to be a fly on the wall at the Principal's Dinner for Benefactors and Trustees being held at the school on April 13th. There surely will be some lively topics of discussion that night among all the old, constipated white men- a transgender teacher and a lesbian bitch with a blog!

Alright, that's it y'all. Goodnight.

Posted by The Burn Team at 8:53 PM No comments: