If you are a graduate of St. Francis Prep, the grade you received in any given class may not be the grade you actually earned. That's because Prep has a phony inflated grading system. Are you shocked? At this point probably not.

Mind you, you will not find any of this information in any publication given to students or parents. And that's a shame, because for $7,000 a year in tuition, they deserve better. This information is distributed to faculty only, via memo signed by Patrick McLaughlin at the end of marking periods and the faculty handbook.

The minimum grade any student can receive for the 4th quarter at St. Francis Prep is 55. That means, even if little Sally or Johnny really earned, through their own effort (or lack thereof) a 40 in Chemistry, they will still get a 55 on their report card. In addition, final exam grade failures "below 55 must be recorded as 55." Keep this in mind now as I tell you a final grade for a student for any course may not fall into the range of 71-74. This is also prohibited. Quarterly grades may be in the range of 71-74, but failing grades for a whole course may not be in that range.

What is funny is that the faculty handbook, in Section D-5, it states for Regents Exams, for teachers to "record the actual grade." Wow, isn't that a novel idea!

Here's the actual page from the handbook: 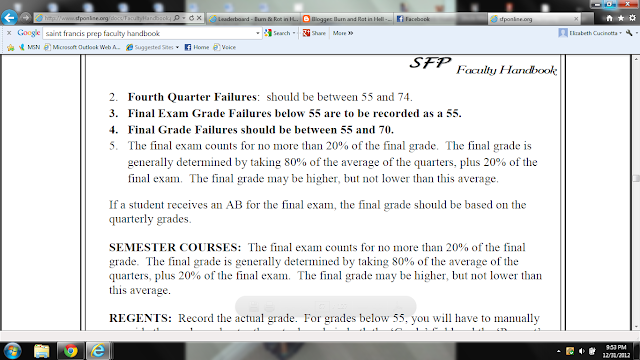 And if you Google St. Francis Prep faculty handbook, you can see the whole thing.

So let's break this down:

At the end of the year, after all the quarters are averaged with her final exam, Sally's final grade is 73, which should be failing because passing is stated to be 75 in the school calendar. However, a teacher is prohibited from giving a final grade for a course in the range of 71-74.  If the teacher fails Sally with a 70, her mom or dad comes in and says, "But her average is 73, so why did you give her a 70?" What would you say as a teacher? How would you explain giving a grade lower than the actual average? You would never actually lower a kid's real average just to fail them, right? To do so
would mean you are an obvious liar and horrible person to the parent. So you bump the 73 up to 75 so that Sally passes the course. No parents would complain about you adding a couple of points through the goodness of your heart. Even if a teacher insisted on giving the lower failing grade, it is prohibited. If a student's real grade for a course is 71, they are REQUIRED to be bumped up to a passing grade of 75. Look above where it says "the final grade may be higher, but not lower than this average."

A lot of kids passed courses this way. They didn't really pass, they passed because of a phony inflated grading system.

The required minimum grade of 55 for the 4th quarter also bolstered the averages, as I had mentioned earlier. Some teachers were pissed about this, having to give a phony minimum grade of 55 instead of the lower, real grade. So what they would do is give 55 on the report card, but then for the year end average, use the real quarterly grade that was lower than 55 instead of the falsely inflated one. This, however, was not really "supported" by the powers that be. They wanted to keep the averages as high as possible so it could look like students at Prep earned better grades than they actually did.

I didn't have many students with averages lower than 55 in my almost 4 years teaching there, so I never really had to grapple with that issue much. I did, however, have quite a few kids fall in that 71-74 range for a final course grade. The faculty would frequently talk about that situation - why not just make passing 70, like at other schools, and give kids their real grade?  But administration never wanted to do that. They would rather go with the phony, inflated grade that made the school seem like it had higher standards.

If you are a Prep graduate or student, go look at your report card. You will not see a failing 4th quarter grade of less than 55 on a report card, nor will you see a failing course grade in the range of 71-74.

At the end of every year, I had ethical trouble with the 71-74 thing. I graduated from Fordham's business school second in my class, and I never cheated on anything. My freshman year there a girl offered me $2,000 to write her Philosophy paper for her because she was failing out and I didn't do it.

Every year, as I would calculate the final grades for my students at St. Francis Prep, my wife would say to me, "Why do you do this? You know this is not OK. Why do you keep working there?"

By the way, a tenth anonymous phone call today. "Whomever" is doing this can kiss my ass, these blogs will keep going up until there is change. Happy New Year!

March 2nd, 2013: St. Francis Prep has made the public link to their Faculty Handbook password protected as a result of the February 28th, 2013 blog about their Child Sex Abuse Policy. So you won't be able to view the grading policy online now. However, we have printed a complete copy so if you want one sent to you, please contact us and we will send it. Thank you. 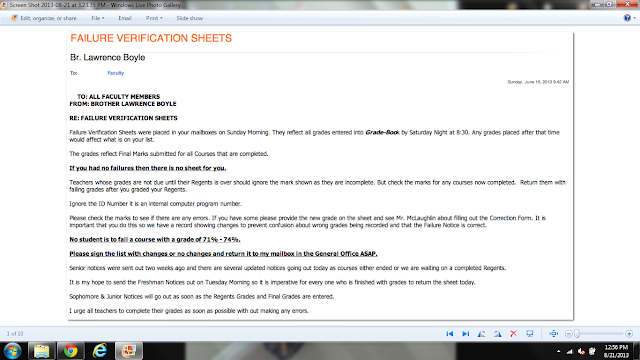