I Can Lead a Horse To Water, But Can I Make It Google?

I am writing this blog just to clarify a couple of things. One, for all of you who are saying I am making money off this blog, you don't really know anything about websites. You only make money on pages that show ads. Do you see any ads on this page? Noooooooo. I purposely keep it that way so people like you can't have shit to say about my company making money off the blog.

Secondly, the well spoken and observant person who on the last blog commented "you yourself is a lesbian" who also stated "you would have proven all this to be true the second you found out"...uh, if you had actually read the blog, you would see that it all happened before I worked there, and everyone knew, especially the administration,  and no one in a position of authority did anything about the vast majority of it. And if they did do something, it was probably because they were forced to by someone who wouldn't back down. The things I found out, like that Brad was dealing drugs, I reported. That's the point. Got it now?  You obviously failed reading comprehension, maybe you should take senior year English again.

One more thing about Brad, for the person who commented "you don't know the story behind the scene with this student." Listen, I knew the story FOR EACH OF MY STUDENTS. Brad was kicked out of his last school, Prep took him in as a senior year transfer, and they begged me to give him decent grades because his dad had money. This is fact. I had poor, hardworking kids in that class with good grades who were going to Queensboro Community and Queens College the following year. Brad, with his shitty record and average grades, got accepted to Colgate.

And for those few who say I am making it all up...do you know how to Google? Let me teach you. Go to Google.com. In the search box, type Tom Nuzzi. Then click on the first link that pops up, "Defendants in the Nuzzi Lawsuits." See the 742 comments? Click on that please. Go down to the March 28, 2007 entry by Randy. Do you see where he mentions the ski trip scam at St. Francis Prep? Do you see all the other 700 or so sexual harassment/stealing complaints and comments? This piece of shit worked at Prep, stole from kids and f*cked girls, and no one at Prep did a fu*king thing about it to stop it from happening again. They let him go quietly out the door, and even this happened only because a parent found out. Then this piece of garbage went across country over the next 20 years, doing the same thing to other kids in other schools. Is it sinking in yet? I certainly hope so.

So far I have received 9 anonymous phone calls since the first blog went up, and "someone" tried to hack my personal email twice. I know this, because Yahoo sent me notifications.

That's pretty much all I have to say tonight. And below is a little treat for you. G'night, y'all! 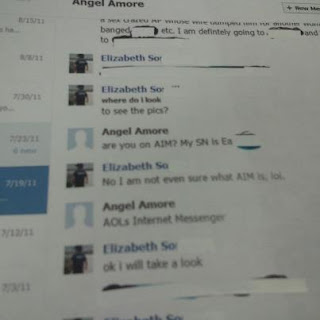