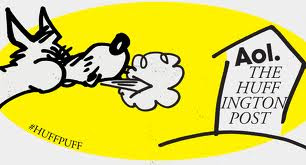 AOL recently finalized its $315 million acquisition of the Huffington Post online news website recently. The result is that the new AOL/Huffington Post are GRADE A WIMPS!

We learned from a Burnandrotinhell.com member and frequent AOL blogger yesterday that as a consequence of the merger, AOL changed the rules for its political blogs. Not only that, but AOL /Huffington Post is screening (that means BIG TIME CENSORSHIP, PEOPLE!) all posts. AOL bloggers used to be able to have their political posts go up in real-time without screening.

Now, everything is screened, and what is even more insulting is that users can now be booted for using words like “moron.” AOL apparently doesn’t want anyone to be too offended. What’s the point then in letting people post? Maybe the new policy should say “You can only post here if you are going to talk about daisies and pretty ribbons, so that no one’s feelings will be hurt, ever.”

Gee, it doesn’t seem anyone was too worried about “Huffington posts” that the owner of this site would find offensive when she was a headline story a few weeks ago. If we recall correctly, she was called all sorts of things by the people posting comments. Wow, it’s amazing how getting money from a merger changes everything.
So what is an AOL blogger to do?

Well, they can keep doing what they are doing now, and use the finance articles as a make-shift political blog. Or, they can really be able to express themselves, and go to the Politics section of Burnandrotinhell.com and Burn, baby, burn!

You think the government is taking our country in the wrong direction? BURN!

You think oil prices are too high and part of an international government money-making conspiracy? BURN!

Why doesn’t anyone talk about BP anymore ? All that oil down by Louisiana that killed all the wildlife is gone? No, it isn’t, BURN!

Does Donald Trump do his own hair and will he keep it that way if he is elected president? BURN!

Happy Burning!
Posted by The Burn Team at 12:00 PM