UPDATE: 5/5/2014
Happy Cinco de Mayo! We would like everyone to know that the depth and scope of the movie project discussed below has increased exponentially due to some recent events, including some additional well-known industry talent coming on board. If you would like to contribute your story to this project, you can contact us by email at hell@burnandrotinhell.com or the Director/Executive Producer Nick Deninno on Twitter @nickdeninno.

I want to remind you that if you feel you were harmed as a student of St. Francis Prep, you can contact Attorney Kevin Mulhearn at 845-398-2346. He is a good, kind, an honest man and he will do his best to help you.


I haven't blogged in a while, and I had to think about whether I even wanted to, or should. There's a lot of things happening, and those things have taken a lot of my attention recently. But several people have been asking what, exactly, is going on, so instead of repeating myself, I realized the best thing to do is say it once, here.

First, I want to say that after the Michael Moran blog was published, three things happened. One of his victims came forward, one SFP graduate found him, and someone unrelated to SFP who read my blog also found him and is planning on paying him a visit. Thank you to these three people, for your courage and help, from the bottom of my heart.

Second, I want to thank the several teachers who have been telling someone well-respected in the SFP community that I am a hero. Your compliments are very much appreciated. However, my intent was never to be a hero. My intent has always been to make sure children are protected. So I hope that when, and if the time comes, you tell the world what you know - things like Mr. Stenger had set up a gym in his house solely for the reason of luring the boys over to "work out" with him, and that he died with a huge collection of kiddie porn in his house. This is a once in a lifetime opportunity for change at SFP. There will not be another. Do the right thing.

Third, I wanted to update everyone on the movie I am co-producing. Saturday Night Live alumnus and Executive Producer Nick DeNinno is a native New Yorker who started reading my blogs a while back. One day, he rang me up, and simply said, "I know truth when I read it." On that day, a partnership was born. He and I went back and forth about what the tone and content of the movie should be - should it be a hardcore documentary, or something else? There are many, many serious issues here, so at first we were leaning toward a straight-up documentary about the last 30 years at SFP. But then, the team read my blogs again, and my co-plaintiff, Felicia Mooradian, wrote character profiles and a treatment. Once we did that, we realized it has to be a comedy. A very dark comedy, in a mockumentary format, that is "inspired by true events." There was really no other way to go. I mean, really, let's think about this - the financial controller of SFP was convicted of conspiracy to commit robbery, the activities director could have easily stepped out of of a Tom of Finland gallery, they fired a transgender teacher who was there 32 years, even though there are currently gay faculty and staff in the Science Department, English Department, and Library, etc., and on numerous occasions I was summoned to help find the teeth of the former dean, who wound up screwing me over once my website launched. Oh, and of all things, a website launched by two lesbians called Burnandrotinhell.com played a part in bringing several lawsuits against the country's largest Catholic high school. It has to be a comedy, for sure. So the website PrepTheMovie.com will launch in a few weeks. The specs are with the web designer right now,and the website should give a clearer (and funnier) picture of what the movie itself will be like.

I am still very upset about Marla being fired, by the way. It really is a tragedy. I often wonder why there "allegedly" was so much animosity toward her by certain members of the administration, who "allegedly" called her "worse than gay." Maybe it was because Principal McLaughlin's ex-wife now prefers a woman as her romantic partner. Who knows?

Also, in case you haven't heard, there is a new lawsuit filed against the school. It alleges that Assistant Principal Mendolia and former teacher Fernando Sicilia sexually harassed a female student, and also alleges that certain administrators were aware they had done this sort of thing before. I am not saying anything else, because broader scale media is covering this, and I don't want to infringe on someone else's negotiated "exclusive."

Lastly, I want to give an update on the other three current lawsuits. April 30th the attorneys are giving oral arguments regarding the school's motion to dismiss the cases. (It's the same move they made in Marla's case. So inventive!) I spoke to Felicia Mooradian about this recently, and I explained to her that the hearing for her case is not to decide whether or not this happened. It's about the fact that she filed her lawsuit shortly after the statute of limitations had run. Then I told her that if her case gets dismissed on this issue, no one will hear the truth until she writes a book. I told her people want to know the truth now, and there are still some people out there who think she's lying, probably in part due to SFP "denying her allegations."

Well, that girl did some digging. She went way back into her emails from 2006, when Brother Ben, and another teacher she reported for grossly inappropriate conduct, were removed from teaching at SFP. So here's a little "proof" for those who have been clamoring for it:

This is an email Felicia wrote to her grandmother updating her on the Br. Ben situation:

Here's what her grandmother wrote back:

Here's another one she sent to her grandmother a few days later: 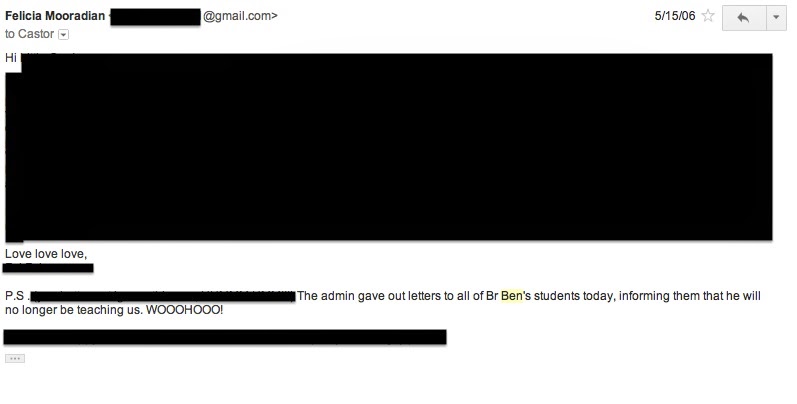 And here's one sent to religion teacher Sue Vivona about the other teacher Felicia reported for disgusting behavior, and the end result of that: